One of the problems that IT often has with business systems — especially those on which users or customers are dependent for real-time or near real-time interactions or transactions, such as email or eCommerce systems — is that users are often the “canary in the coal mine” in determining when a problem has occurred. For example, IT will often learn about an email downtime only when there’s a spike in traffic to the corporate help desk, or calls to a help line will be the trigger that notifies IT that a customer-facing system has gone down or is providing unacceptable performance.

dinCloud has introduced an interesting offering called “James“, what they’re touting as a virtual robot designed to monitor systems on a 24×7 basis. James is designed to monitor a wide variety of systems, such as eCommerce platforms, corporate email, databases and a variety of other systems that support business processes and workflows. The basic goal of James is to monitor systems continually for events like outages, system errors or performance that drops below a predetermined threshold, and then alert IT about the problem so that the issue can be rectified as quickly as possible. The example below, from dinCloud’s web site, is a basic example of how James works. 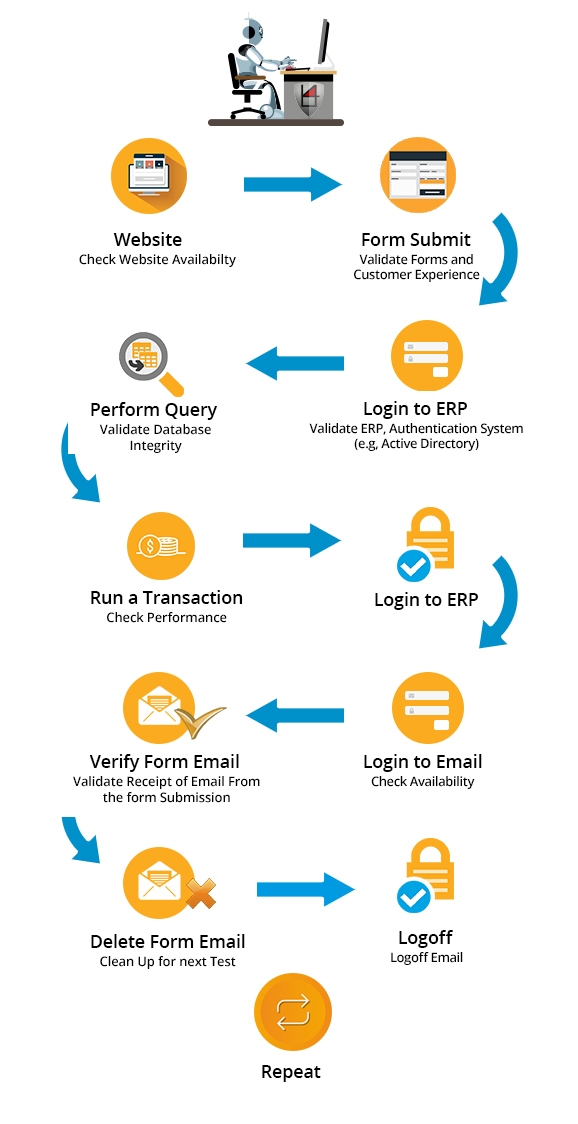 Although James can be used in any environment, it seems especially well-suited to smaller organizations that may not have the technical expertise or other resources needed to monitor key systems on a continual basis. dinCloud offers a turnkey approach for customers, helping them determine what to test and providing services around configuration and deployment of the system. James also supports a real-time dashboard that enables decision makers to keep an eye on system performance and receive alerts when problems are discovered.

While I’m not crazy about the name “James” as it applies to this offering (perhaps something like “Virtual System Monitoring Robot” might be more descriptive), I really do like what dinCloud is doing here. Downtime and poor system performance are the bane of online systems because even small glitches can create major problems. For example, an older study found that about 40 percent of US consumers will give up on a mobile shopping site that won’t load in just three seconds, and a 2016 study found that the cost of unplanned downtime for a large organization will cost an average of nearly $8,900 per minute. Our own research finds that email outages of even just 10 minutes can create problems.

In an era of ransomware, DDoS attacks, hacking and other threats that can create significant levels of downtime in addition to the more traditional causes like server crashes or application faults, system monitoring should be high on every IT manager’s priority list.